Taylor’s fate “Up In the Air” as New Season Looms

Doubt has been raised about the likelihood of Buffalo Bill’s Star Quarterback, Tyrod Taylor, returning to the team before their first game of the season this Sunday.

Taylor suffered a devastating blow to his new season following a head injury he suffered against the Baltimore Ravens after getting sacked by Matt Judon.

Taylor hit the ground hard in the preseason game on August 26th and had to be taken off the pitch and replaced by Rookie, Nathan Peterman.

It was reported by the team shortly afterward that he had suffered a concussion.

He has since returned to training, but the likelihood of him starting against the Jets at the weekend remains in doubt due to the NFL’s concussion protocol. 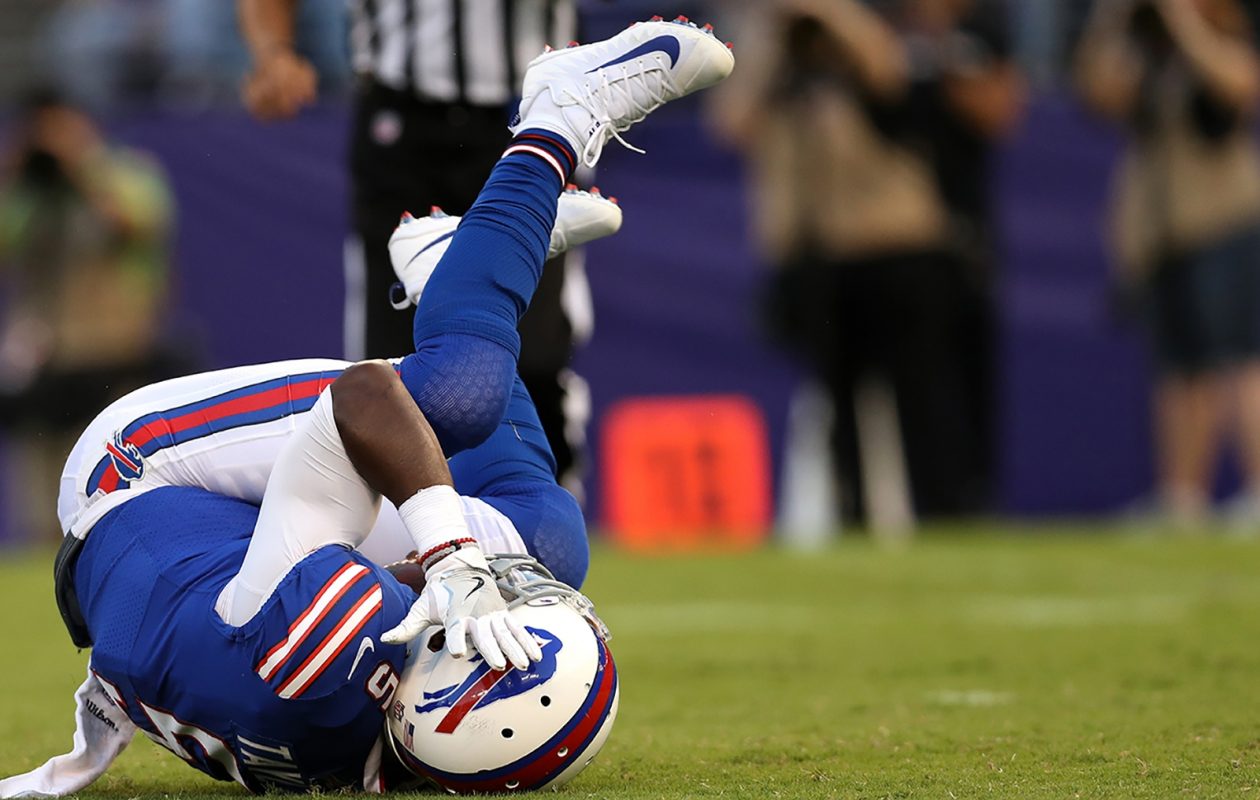 Taylor after his sacking against Ravens, courtesy of Matt Judon

The protocol is a 5-Step Process, dubbed as “Play Smart, Be Safe”, is in place to prevent further damage to players.

As part of the protocol, he is allowed to train with the team in a no-contact format after clearing initial testing. However, his return to full team service is suspect to further assessment by the team physician and an independent Neurological consultant who have the final say on whether he is fit to play.

If this does not come to fruition, then the Bills may be in a very sticky situation, as second string quarterback, T.J. Yates, is also nursing his own concussion dramas. He too returned to training but is very much in the same boat as Taylor and if any signs of concussion remain then it will be curtains for a first game run out for the pair of them.

Although due to their positions as Quarterbacks contact is a lesser issue, Sean McDermott seemed less than convinced that they will be cleared and is quoted as saying that Taylor’s playing status is still “Up In the air”.

Everyone in the Bills camp will be hoping that they are back in the cut for Sunday, but if not and these guys are out, then who is in?

Of course, Nathan Peterman is the natural choice as he  was the replacement against the Ravens, but whether or not he has the experience to become a game changer is up for discussion, especially against a team with the caliber of the Jets.

However, at 23, Peterman is one for the future, so it would do him no harm to have some regular first team runs out for the Bills.

He has already been given the thumbs up by both coach and manager, with McDermott expressing his confidence in the young man and Brandon Beanes comments earlier this week that he is “better than i expected”.

As such, this may be a blessing in disguise for both Peterman and the team, as if he proves he can handle the first team pressure and perform accordingly and he may potentially be able to cement himself as a regular starter.

The only other real option for now is Joe Webb, who arrived at the Buffalos on a free agent on Monday, however, he hasn’t impressed of late and was released by Panthers just days before.  He seems more likely to be a way for the Bills to hedge their bets in case, God forbid, the run of bad luck continues with Quarterbacks and something happens to Peterman.

If this run of bad luck does continue or we see more injury dramas from the offense at Buffalo Bills, then their season could be over before it has even started.