Although it never really seemed in doubt, it was announced on Monday that Matthew Stafford will be staying in Detroit for at least 5 more years, but it didn’t come cheap

The deal has been clocked at 135 Million, which works out as a around 27 Million a  year, which makes Stafford the most expensive player in the NFL right now.

The contract also includes an added 50 Million Signing Bonus, as well as 90 Million Guarantee on his contract, which no doubt made very happy reading for the 29-Year-Old Quarterback. 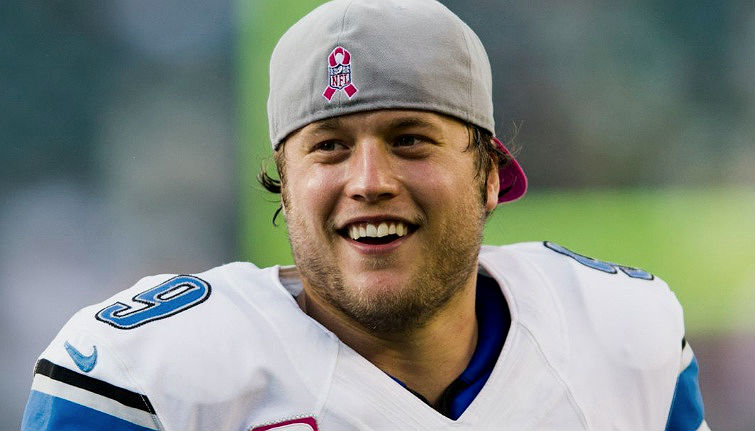 Stafford has been representing the Detroit Lions colors for 8 years now, since his first NFL run out back in 2009, and both he and the Lions seemed comfortable enough with each other as it was.

This was indicated by Lions camp bragging back in June of the likelihood of them keeping him in the squad. Team President, Rod Wood, bashfully stated that they would do “Whatever it takes” to keep him in Detroit, but perhaps not many had suspected that the deal would be worth quite as much as it has transpired to be.

However, this latest extension will see Stafford at the club until 2022, a 13 year tenure in total, which will be effectively ending in the autumn of Staffords career, so this could be seen as a lifetime deal to many.

Keeping such a crucial player in one place for such a long time is the dream of all coaches out there, so the fact that he will now be there for the foreseeable future may hint towards why the deal is such big bucks.

This massive deal will certainly set a precedent for future pay checks in the NFL to increase further as time goes on, with all the biggest names no doubt taking note.

So don’t be surprised if we see young bucks go for astronomically figures in the near future, as teams start to feather their nests for the long run in this ever competitive age where money talks more than ever.

Especially when we consider that this deal only narrowly edges the previous record deal set earlier this summer by fellow Quarterback, Derek Carr, whose 25 Million deal with the Oakland Rangers will keep him there for further for 5 years too.

As such, if the trend this summer is anything to go by this will be just the beginning of this type of seriously competitive pricing.

Big money aside, the deal is hugely beneficial all parties involved.

Stafford is instrumental to the Lions and has been since he first started in Detroit. Staying consistently in form, bar a spell of injuries in 2010, whereas other areas of the team have not been so reliable. As such, making sure that he stays content and happy where he is will be very important for the side in the long run.

Not to mention, that we are now just 10 days away from the new season, so they will very much satisfied at making sure he is a permanent fixture this year, regardless of criticism they may suffer about the amount spent.

As such, this move will make everyone involved in the extension content, with the coaches at ease, the board room satisfied and Stafford comfortable, the fans will be able to breath a sigh of relief and be feeling hopeful as they head into that first game against the Arizona Cardinals on the September 10th!