Jay Cutler is a 34 year old quarterback. He has put off early retirement and has instead signed a one year deal with Miami Dolphins. Cutler’s new contract is worth $10 million. In addition, according to NFL Network’s Tom Pelissero, there are also further incentives which could accumulate to approximately $3 million. 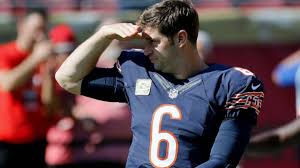 The move will see Cutler reunited with Adam Gase – a former offensive representative. They worked together for one season in 2015. A strong bond soon formed between himself and the 39-year old head coach. Gase really did push to have Cutler on the team. Unfortunately, Ryan Tannehill’s knee injury is very serious and he may be out for the season.

Tannehill hasn’t yet reported whether or not he will be having surgery, but the recent signing of Cutler could very well mean that the Dolphins are looking to mitigate any losses to the team as soon as possible.

Cutler did comfortably report that he was in a comfortable “permanent” retirement. However, there was always an out clause for the first round pick. Cutler has had to put his broadcasting career on hold to join the Miami Dolphins, but looks confident to do the job and help out his pal Gase. it is important to note that, Cutler’s success with the Dolphins is no guarantee. In his last NFL season he only played five games and his stats were at 59.1% for passing. He also had five interceptions and four touchdown passes.

Cutler will need to get his head in the game. He is walking into a very different situation with the Dolphins. In the past, he has been misunderstood, his dry sense of humour were interpreted as apathy by the public. However, Gase already knows what Cutler is like and will surely give him a chance to prove himself.

Tannehill has logged 2,995 yards, 19 touchdowns and 12 picks in 13 games. Cutler logged 3,659 yards, 21 touchdowns and 11 interceptions when he played for Gase in 2015. This begs the question, is Cutler an upgrade? Time will tell. The Dolphins are clearly confident in his abilities and want to see what he can bring to the table for the season.